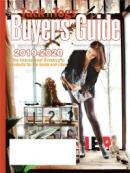 Trade show tax deductions
Feb 20, 2020
Attending a trade show can mean big bills for travel and hotels. Businesses can deduct those expenses on their tax returns, softening the blow to the bottom line. However, deductions must be supported by adequate documentation to be defended in...

Royal visit to BETA International
Jan 24, 2020
Plans were announced for the show to move to NAEC Stoneleigh, in Warwickshire, next year.

Growing emphasis on convenience for today's consumers
Jan 17, 2020
Consumers say convenience while shopping is more important to them now compared with five years ago.

NRF welcome Senate passage of USMCA
Jan 17, 2020
The USMCA was approved by the House in December and now goes to President Trump for his signature.