VSV continues to spread among horses in Kansas 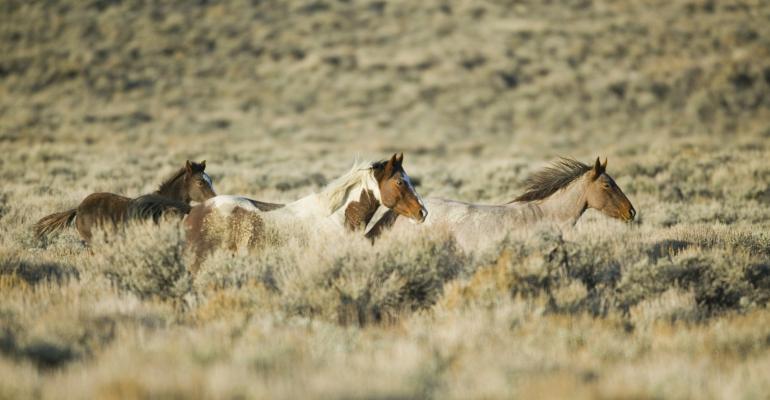 As of June 30, officials had confirmed vesicular stomatitis on more than 30 premises in four counties in south-central Kansas.

The Kansas Department of Agriculture's (KDA) Division of Animal Health announced June 30 that it is responding to an ongoing outbreak of vesicular stomatitis virus (VSV) that has continued to spread in horses across south-central Kansas.

KDA said VSV was first confirmed in Butler County, Kan., on June 16 and has now been confirmed by testing on more than 30 premises in four counties in the region.

All premises with confirmed cases of VSV in horses have been quarantined; in addition, any premises with animals showing clinical signs consistent with VSV are placed on quarantine, KDA said in its announcement. More than 60 premises are currently under quarantine in Butler, Cowley, Sedgwick and Sumner counties. A quarantine for VSV lasts for at least 14 days after the onset of symptoms in the last animal on the premises. Quarantines are not lifted until a veterinarian has examined all susceptible animals on the premises.

VSV is a viral disease that primarily affects horses but can also affect cattle, sheep, goats, swine, llamas and alpacas. At this time, all confirmed cases of VSV in Kansas are horses, although some cattle have shown clinical signs, and confirmatory laboratory results are pending, KDA said.

“This outbreak is still very active in south-central Kansas, and we encourage all owners of horses and other livestock to continue to be vigilant,” KDA animal health commissioner Dr. Justin Smith said. “Monitor your animals for symptoms of VSV, and be in communication with your veterinarian if you see anything of concern. The most effective way to slow the spread of this virus is to take aggressive steps to limit exposure to insects that are the primary source of infection.”

In horses, VSV is typically characterized by lesions that appear as crusting scabs on the muzzle, lips, ears, coronary bands or ventral abdomen. Other clinical signs of the disease include fever and the formation of blister-like lesions in the mouth and on the dental pad, tongue, lips, nostrils, ears, hooves and teats. Infected animals may refuse to eat and drink, which can lead to weight loss. Vesicular stomatitis can be painful for infected animals and costly to their owners. Although it is rare, humans can also become infected with the disease when handling affected animals and can develop flu-like symptoms.

KDA said the primary way the virus is transmitted is from biting insects like black flies, sand flies and midges. Owners should institute robust measures to reduce flies and other insects where animals are housed. VSV can also be spread by nose-to-nose contact between animals. The virus itself usually runs its course in five to seven days, and it can take up to an additional seven days for the infected animal to recover from the symptoms. There are no approved vaccines for VSV.

KDA has developed guidelines to assist organizations that are hosting shows and fairs across the state and worked with many of them to consider how they can protect the health and safety of animals attending the events.

Kansas was the fourth state in the U.S. to have confirmed cases of VSV this year; VSV has also been confirmed in Arizona, New Mexico, Texas and, most recently, Nebraska — although the outbreaks in other states may have ended.

Because of the confirmed cases in Kansas, other states and Canada are likely to increase restrictions on livestock imports, KDA noted. Animal health officials strongly encourage all livestock owners and veterinarians to call the animal health authority in the destination location for the most current import requirements prior to travel.

VSV is considered a reportable disease. If clinical signs are observed among animals, contact a veterinarian right away, KDA said.