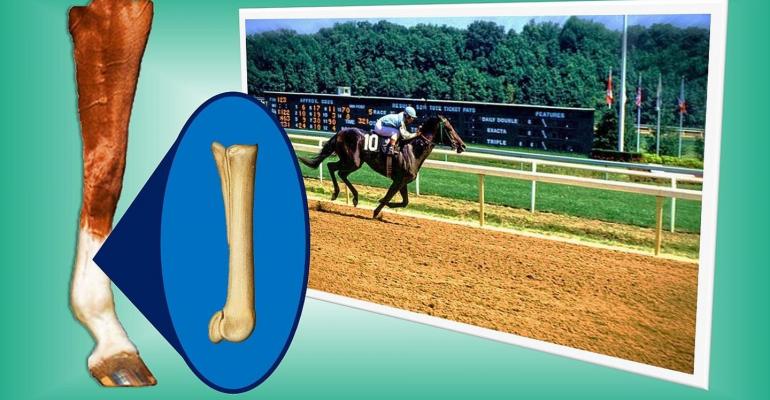 Johns Hopkins Medicine researchers recently compared the third metacarpal, or cannon bone, from three different breeds of horses to better understand how it responds to mechanical stresses, like those experienced during racing.
Adding specialized training could help leg bones of Thoroughbred horses adapt to extreme forces of racing.

Racehorses operate at a biomechanical extreme. The 1,000 lb. or so animals can move up to 40 mph on long, thin limbs that evolved genetically to move them across long distances. When pushed to race at high speeds, however, a horse's legs can fracture beneath it in an event called a breakdown, according to Johns Hopkins University School of Medicine.

According to an announcement from the school, 70% of these injuries occur in the third metacarpal bone between the horse's knee and pastern (the area just above the top of the hoof). Because of the fragile nature of the limbs, breaks such as these can cause irreparable tissue damage, most often resulting in the animal having to be euthanized.

In an anatomical comparison of the third metacarpal (cannon) bone among Thoroughbred racehorses, American Quarter Horses and feral Assateague Island ponies, Johns Hopkins researchers have found that fostering adaptations in these bones through training might help horses better endure the extreme conditions of racing and prevent serious, often life-ending injuries on the track.

"With so many Thoroughbreds breaking their legs this way, we thought there must be a way to predict and prevent it," said Deanna Goldstein, a doctoral candidate in the Center for Functional Anatomy & Evolution at the Johns Hopkins University School of Medicine and lead author on the paper, which was posted online Aug. 17 in the journal The Anatomical Record.

To understand why racehorses break down, Goldstein studied the canon bones of the three breeds, comparing their sizes, densities and abilities to bend without breaking to examine the effect of each breed's lifestyle and training.

Thoroughbreds, for example, are trained to run long distances around turns for races like the Kentucky Derby. American Quarter Horses are trained to sprint short distances in mostly straight lines and are named for their superior ability to run a quarter-mile faster than any other breed. Assateague Island ponies are shorter, stockier animals that are wild, therefore offering an untrained population against which to compare Quarter Horses and Thoroughbreds.

"Comparisons between these breeds present an interesting opportunity to look at the relationship between the mechanical stresses on the bone and the bone's structural response in an animal that is pushed to its physiological limits," Goldstein said.

In the study, bones were collected only from horses that died or were euthanized for reasons unrelated to a broken or injured third metacarpal bone, she said.

Although the size of the third metacarpal bone varied among the three horse breeds, Goldstein was surprised to find that the bone's strength and structure relative to body size were remarkably similar across the three types.

"If Thoroughbreds are racing and training around turns, you would expect certain areas of their bones to be a lot stronger to reflect that," Goldstein said. "However, since the Thoroughbred third metacarpals are not more dense or stronger than the other two breeds, it indicates that the Thoroughbreds' bones are just not prepared for those forces."

She said what should be seen is evidence of bone remodeling — the process by which new bone growth helps the skeleton respond to mechanical stress. Similar to how weightlifting strengthens human bones, exposure to the stresses of racing around turns should create anatomical differences between Thoroughbred horses and other breeds. These adaptations would prepare their bones to resist fracturing.

Goldstein suggested that adding training around tighter turns at higher speeds could give Thoroughbred horses' bones time to adapt to the extreme forces and be more resistant to breaks on the track.