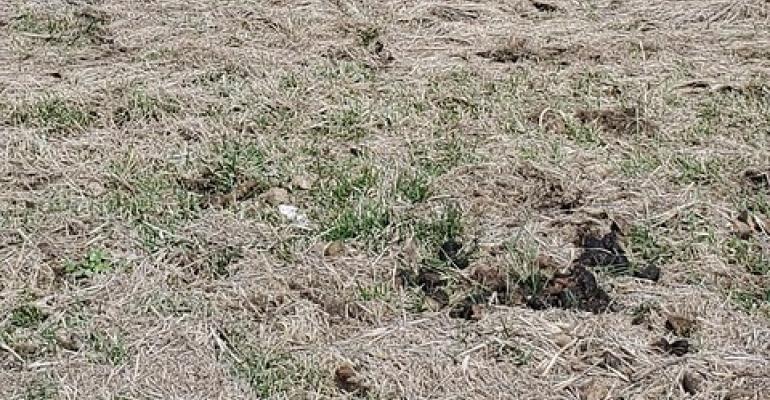 A byproduct of horse ownership, horse apples can help feed pasture plants but should be dragged or harrowed to ensure a more even distribution of nutrients.
Propensity to overstock horses on available land is the result of "unrealistic expectations for pasture health and management."

However, when owners try to make the pony-in-the-backyard scenario work, they may be unwittingly overstocking their pasture.

“Keeping horses on their own few acres is the dream of many,” he said. “However, the propensity to overstock available land is the result of unrealistic expectations for pasture health and management.”

Philipp recommended “no less than two acres of pasture per horse; with barns and facilities included, no less than four acres total land area available per horse.”

“Fertilize according to these tests, and specify prior use and location,” he said. “Soils around subdivision developments are usually highly disturbed and may be lacking certain nutrients.”

The next consideration is choice of forages. Philipp said perennials such as bermudagrass and bahiagrass are the forages of choice, especially when interseeded on occasion with winter annual forages. He added that fescue remains an option.

“Tall fescue gets a bad rap, but it is perfectly fine unless your mares are pregnant,” he said. “If plantings are newly established, go with non-toxic, novel endophyte tall fescue.”

Because horses graze very closely to the ground, they will ruin any pasture if overstocked. “However, tall fescue, bermudagrass and bahiagrass are relatively resistant to overgrazing,” Philipp said.

Hay and pastures don’t always mix, Philipp said, because hay may carry weeds that can intrude on pastures. “Do not feed purchased hay on any of your grazing paddocks, but instead only in designated hay feeding areas,” he said.

Philipp also recommended not making hay from pastures on which horses were grazed, in order to break parasite cycles. “After you make hay, you can stock horses but make sure to still rotate them to other paddocks to break pest cycles.”

While horses may graze closely, they don’t graze evenly, which means there’s mowing in the horse owner’s future.

“The number one purchase a horse owner can make for pasture maintenance is a mower,” he said. “Pastures should be trimmed to a 6- to 8-in. height. This keeps an even canopy height and helps with weed control.”

Philipp said a sickle bar mower is the best because of its ability to make clean cuts, but a bush hog can also do the job. He cautions against “mowing excessive amounts of biomass as those can create mats on the pasture and hamper regrowth.”

“You should drag out the horse feces piles,” Philipp said. “This will ensure a somewhat more even distribution of recyclable nutrients, plus a harrow will ‘comb’ the grass, pull out dead or dormant material, and aerate the surface.”