Chronic inflammation may play role in insulin dysregulation in horses 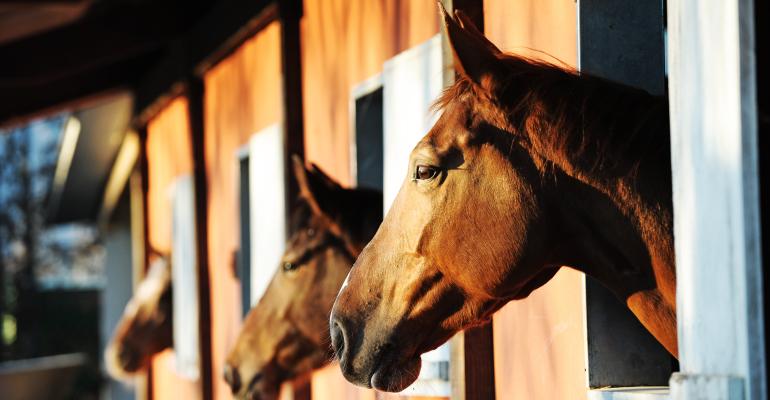 Findings could help inform dietary recommendations for horses at risk of laminitis, which is linked to high insulin levels associated with disregulation.

Inflammation may be a bigger player in insulin dysregulation in horses than is commonly thought, according to an announcement from the Morris Animal Foundation.

In Australia, University of Melbourne researchers funded by the foundation are working to determine if low-grade systemic inflammation might be an important underlying cause of insulin dysregulation, the announcement said.

The findings could help change current dietary recommendations for horses at risk of laminitis, a devastating disease linked to high insulin levels associated with insulin dysregulation, the researchers said.

“While there’s evidence to support this theory, recent studies infer we do not understand exactly how different diets cause changes in insulin metabolism,” University of Melbourne lecturer Dr. Nicholas Bamford said. “We want to investigate other possibilities to provide horse owners, veterinarians and feed manufacturers with the best information to keep horses healthy.”

Insulin dysregulation is a condition that occurs when horses produce excessive amounts of this hormone in order to process blood glucose. The current recommendation for feeding horses with the condition is to avoid high-starch and high-sugar diets, the foundation said. As the pancreas releases insulin in response to dietary starches and sugars, reducing the amount of these components in the diet should theoretically reduce the amount of insulin secreted following a meal.

In the new study, Bamford’s team will analyze archived blood samples from 49 horses taken during previous diet studies conducted at the University of Melbourne and the University of Minnesota to measure their levels of adiponectin and serum amyloid A (SAA). Adiponectin is a fat-derived hormone known to have beneficial effects on insulin metabolism as well as being anti-inflammatory, according to the announcement. Reduced levels of adiponectin have been demonstrated in horses with insulin dysregulation. SAA is a marker of systemic inflammation thought to be the most sensitive in horses with insulin dysregulation.

The team hypothesizes that one of the significant causes of insulin dysregulation in long-term, starch-fed horses is low-grade systemic inflammation, a mechanism that has been found in other species. Obesity can cause a chronic pro-inflammatory state in other species, but Bamford said this does not appear to be the case in horses.

In previous studies, horses were fed either a high-sugar or high-starch diet for seven or 20 weeks. Horses in the group fed a high-starch diet for 20 weeks demonstrated insulin resistance as well as decreases in adiponectin and increases in SAA, whereas those on other high-calorie diets did not develop insulin resistance (even if they became obese), Bamford said. Adiponectin and SAA were not measured in every group, though, so it is unclear how levels of these analytes changed over time.

Bamford’s team will address this question. He estimates that they will have results from this study in about a year.

“Determining the causes of insulin dysregulation and why certain horses appear to be predisposed to it is so important for our equine populations,” said Dr. Janet Patterson-Kane, Morris Animal Foundation chief scientific officer. “This knowledge could provide an important contribution to the development of nutritional countermeasures to help reduce the incidence of laminitis.”

Underlying insulin dysregulation has been shown to account for around 90% of all laminitis cases in some populations, the foundation said. Laminitis is a painful and debilitating inflammation of tissue in a horse’s hooves that causes severe lameness. It’s one of the leading causes of death or euthanasia among domesticated equine populations.

Studies have shown that as many as 15% of horse owners reported problems with laminitis in their horses over the previous 12 months, with around 5% of cases resulting in death or euthanasia. There is currently no effective treatment for laminitis, so prevention is crucial to avoid its occurrence in susceptible horses, the announcement said.

Source: Morris Animal Foundation, which is solely responsible for the information provided and is wholly owned by the source. Informa Business Media and all its subsidiaries are not responsible for any of the content contained in this information asset.
0 comments
Hide comments
Related